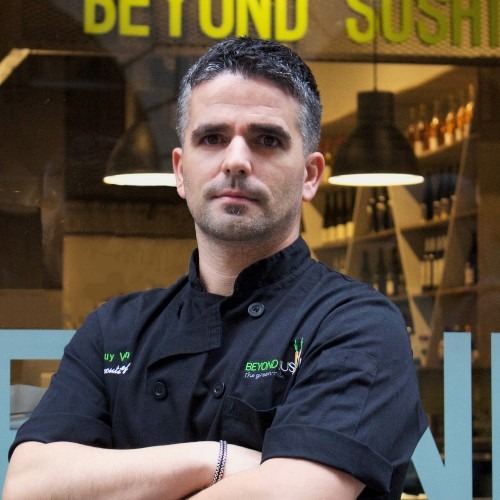 Guy Vaknin is a renowned chef famous for his innovative plant-based creations. Raised in a big family in Israel, food was always the focus of their weekly gatherings. He spent a significant amount of time in his grandma’s Moroccan kitchen making food using the freshest vegetables, herbs, and spices.

After finishing his military duties in the Israeli Defense Force, he moved to the United States and started school as a computer engineer major and quickly realized that it wasn’t the right choice for him. He started working nearly every job in the restaurant industry and that rekindled his love for food. Chef Vaknin then enrolled in the Institute of Culinary Education. Upon graduating in 2007, he became the Executive Chef at Esprit Events, an established kosher catering company in Manhattan. In this role, he met his future wife and co-founder Tali. Together, they developed their signature vegan sushi and the Beyond Sushi brand was born. After expanding Beyond Sushi to five locations in Manhattan, Chef Guy opened Willow, a vegan bistro serving elevated comfort food.

In 2012, Chef Guy was selected as a contestant on Fox’s Hell’s Kitchen Season 10. In 2018, Chef Guy appeared on ABC’s Shark Tank Season 10 and won a deal with investors Lori Greiner and Matt Higgins.

Chef Guy’s vision of creating polychromatic plant-based cuisine has evolved into his newest venture, City Roots Hospitality. As New York City’s leading vegan restaurant group, City Roots brings distinct restaurant concepts and premier catering and events services to the city and beyond. He is just getting started and cannot wait to grow the City Roots brand.

We wanna know…are you team 👇🏽 🍝 PASTA

There’s nothing better than the coming of spring

Contrary to popular belief, sushi is does not have

New on the menu at @willownewyork 💙🤗 Zalmon